If you live in a home that was built before 1975, chances are your plumbing system consists of or may contain cast iron pipes. The main problem with cast iron pipes is that they can corrode over time compromising their structural integrity.

It is estimated that about 76 million homes in America have cast iron pipes that must be replaced in the near future or suffer the risk of severe plumbing problems. Some common problems include a devastating sewer backup into the home or business, water damage, roach & pest infestation, slow or clogged drains, as well as other types of damage due to pipe corrosion.

In most cases, cast iron sewer pipes should last between 50-70 years in a residential application. However in commercial applications, the lifespan of cast iron drain pipes could range between 30-50 years.  Over time the cast Iron pipes start to corrode and cause tuberculation around the inside of the pipe. This “scale” build up can severely  block the flow of waste and water, which leads to blockages and foul odors.

Is there a way to restore the tuberculated cast iron pipe?

Yes! Our team is fully equipped with specialized pipe milling machines that can break up the existing scale build up and restore the pipe to its original diameter and get waste and water flowing as it should. 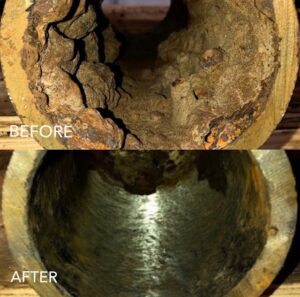 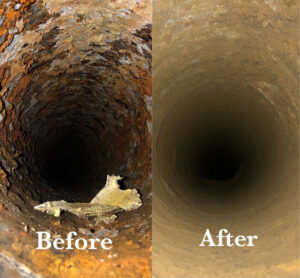 Cast iron pipes can cause severe water damage. It is estimated that between 20-30% of all property damage is caused by water.

Ignoring a damaged cast iron pipe plumbing system is just a water damage claim waiting to happen, as it could be a matter of time before you will have to deal with an expensive emergency for you home or business due to compromised cast iron pipes

If you have any one of the following issues you may have a cast iron pipe plumbing system that is causing a problem:

The Plumbing Technicians at RooterNow can perform an inspection of your plumbing system to find out if you have a cast-iron pipe system that is corroded and needs to be replaced.

With this type of sewer work it is extremely important that you use a licensed plumber with experience. Our plumbing technicians have the knowledge to perform either cast iron pipe repairs, replacement, or relining using CIPP (Cured-in-place pipe).

Contact the Rooter Now plumbing team today to set up an appointment to get your cast iron pipe issues resolved so you will not have to make those pesky property damage claims!